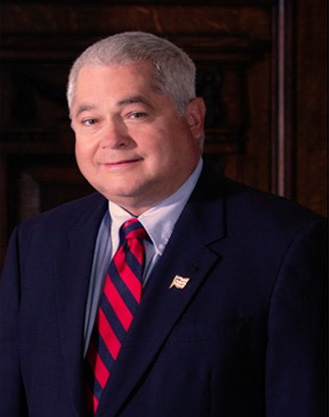 Jim Laria is Clerk of the Akron Municipal Court. As Clerk of Courts, Jim is responsible for maintaining and protecting the court records and collecting and disbursing all monies payable to the Court. The Akron Clerk of Courts Office serves the Cities of Akron and Fairlawn, the Villages of Richfield, Lakemore and Mogadore, and the Townships of Bath, Richfield and Springfield.

Jim Laria brings a vast knowledge of the court system, having worked for over 39 years in our courts. He served as the Chief Deputy Clerk of Courts for five years in the Akron Municipal Court. In this position, Jim was responsible for the management and financial operations of the Akron Clerk of Courts Office.

Prior to working in the Clerk of Courts Office, Jim spent 12 years as the Court Administrator for the Summit County Probate Court and began his career in the Akron Municipal Court in 1979 as a Bailiff for Judge Bill Spicer.

A graduate of The University of Akron with a Bachelor of Science Degree in Education, Jim then completed work at the National Judicial College on Court Administration. Jim has also received the Certified Professional Clerk designation from the Ohio Association of Municipal Court Clerks, being part of the first class to receive such a designation.

Jim Laria has always been active in our community. He won election as a Board Member of the Akron Public Schools. During his service to the Akron Public Schools, Jim chaired the Committee on Accountability and Long Range Planning. He voluntarily stepped down from his position with the Akron School Board to focus on his responsibilities as Clerk of the Akron Municipal Court. Laria has served as a board member for Child Guidance & Family Solutions, where he finished two terms as Vice President of the Board. He served as Treasurer for the Firestone High Aquatic Association and the Falcon Runners Club. He is also a member of the Akron Breakfast Optimist Club which is a youth service organization.